Mike’s Likes: Days of X-Men’s Past: One Hard X-Men Game

Mike’s Likes: Days of X-Men’s Past: One Hard X-Men Game

It’s time to get back into X-Men. X-Men: Days of Future Past is upon us and hopefully reconciles the continuity issues between X-Men: First Class and the regular X-Men movie series. As a pretty big X-Fan, I’m hoping it succeeds in bringing the franchise back to life.

Most people my age are fans of the X-Men for one reason: the popular 90s Animated series. One byproduct of that 90s X-Mania is 1993’s X-Men for the Sega Genesis.

This classic 2D action-platformer was a genuine X-Men experience for me as a kid. The playable characters included the three most popular characters from the cartoon, and Nightcrawler. Nightcrawler only had a recurring guest role in the animated series, but you won’t be too upset that he joins fan favorites Cyclops, Wolverine, and Gambit in this game since he is easily the most useful character in the game. 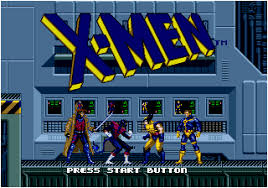 A second player could join you for some co-op fun, but that proves to be a bad idea if you plan on getting anywhere in this game… more on that later…

In addition to the playable characters, there were several assist characters (Storm, Iceman, Rogue, Arcangel, and Jean grey) who mostly acted as screen-clearers or boss-beaters. Ice Man is unique in that he was not one of those offensive characters but instead was used to assist in platforming since he could make ice bridges for you. Jean Grey was a passive assist character who would simply retrieve you if you fell off a ledge (even if the fall already killed you…thanks, Jean.) 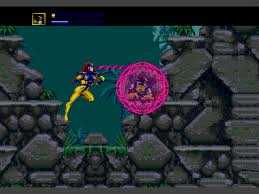 What makes this game feel like a genuine X-Men experience is that every character has unique strengths and weaknesses that are mostly logical based on their classic characterization and mutant powers. Cyclops’ melee attacks are weak but his optic blasts are the best ranged attack in the game and can allow him to safely pick off most enemies in the early stages. Wolverine can unsheathe his claws for extended reach and damage, but his most important ability is his healing power which allows him to slowly regenerate health. Gambit’s cards are another ranged attack that aren’t as direct as the optic blasts but can be charged to home in on enemies. He also has the best melee reach due to his staff.  Nightcrawler is the most useful character in the game because his teleportation power allows players to exploit it in several ways. Nighcrawler can take shortcuts through many areas in the game by teleporting. His powers also allow him to dodge harm with a simple push of the mutant power button. Perhaps unintentionally, it also allows him to cheese most of the game’s bosses. 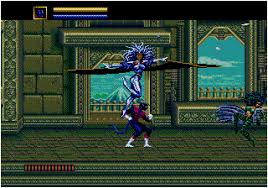 Nightcrawler’s teleportation power allows him to just hover in an invincible state that harms enemies at the cost of very little mutant power meter.  It takes more meter to move him in his teleportation state, but the combination of his shortcuts and his ability to become temporarily invincible while freezing  mid-air makes him the most important member of your X-team. He almost feels cheap, except you need to exploit every trick possible in this game to have any prayer of completing it.

X-Men is hard. Really hard. Forget NES hard, this is Genesis hard. Once one of your four characters dies, they stay dead. There are health and mutant power pickups in the stages but they are usually well hidden. Only Wolverine passively regenerates health, but that is at a painfully slow pace. Between the stages  you can also replenish each character’s heath and mutant power by hitting floating eyeball-looking orbs. You only have a limited time to do this, however. There are no extra lives to be collected although internet rumor has it that you can somehow resurrect a dead X-Man after beating the fifth level. I can’t confirm this since I have never gotten that far in my 20 years with the game.

One would think that this level of difficulty would sap the fun out of the game, but its level of challenge makes it quite addicting, even if occasionally it seems like banging your head into a wall repeatedly. It sadly does make the co-op experience too hard to manage if you are looking to get far in the game. Exposing two X-Men to the pitfalls of gameplay at once simply is bad strategy.

Strategy is the operative word here and as you begin to develop one based on the characters’ strengths and the challenges of particular levels, you will see results. Wolverine is my designated damage sponge because he can regenerate. It is usually worth it to leave the game for ten minutes as Wolverine regenerates in a safe area. Nightcrawler is usually the designated boss fighter and shortcut taker. His life can’t be wasted doing “easy” things, that’s for Wolverine. Cyclops is key for ranged attacks and can essentially get through most of the second level unscathed by ducking enemy fire and returning optic blasts. Gambit isn’t particularly good for anything except maybe hitting the first level’s fleeing boss with his staff.

Once you formulate a strategy like this you will be rewarded by getting farther than you ever have, only to be squashed by the unforgiving, unfamiliar environments. The first three levels of the game are downright beatable. Careful play should yield four fully stocked X-Men heading into the fourth level. That is when the difficulty spike hits like a buzz-saw. In the fourth level enemies can get the drop on you emerging from the background, navigation becomes an issue as several switches must be found to progress, platforming becomes much more precise, and falling damage is ramped up. It takes careful use of Nightcrwler and Wolverine to get to the end of that level, something I achieved for the first time very recently. I then proceeded to lose all four X-Men early in the fifth level. I will likely try again soon…

That’s X-Men for the Genesis in a nutshell. It is a true to the source material action platformer that will challenge your 16 bit skills and your perseverance. They simply don’t make games this hard anymore but sometimes while playing this game you may realize that there may be a reason for that. Still, if you own a working Genesis (emulators are bad, mm’kay?) and are any type of X-Fan you owe it to yourself to give this game a try. You could always just play it on the lowest difficulty and have the game stop you and taunt you for being an amateur after the third level…

Welcome all to the newly updated AYCG site! Enjoy your visit and please check out our podcast if you haven't already!